NEW YEAR 2022: What Will We Become? For Educators & Artist-Teachers
Skip to main content
The book has two parts: A narrative of ideas that lays out the wisdom-based learning orientation in relation to my development as a philosopher, and a practice section that discusses how to apply the principles of wisdom-based learning. 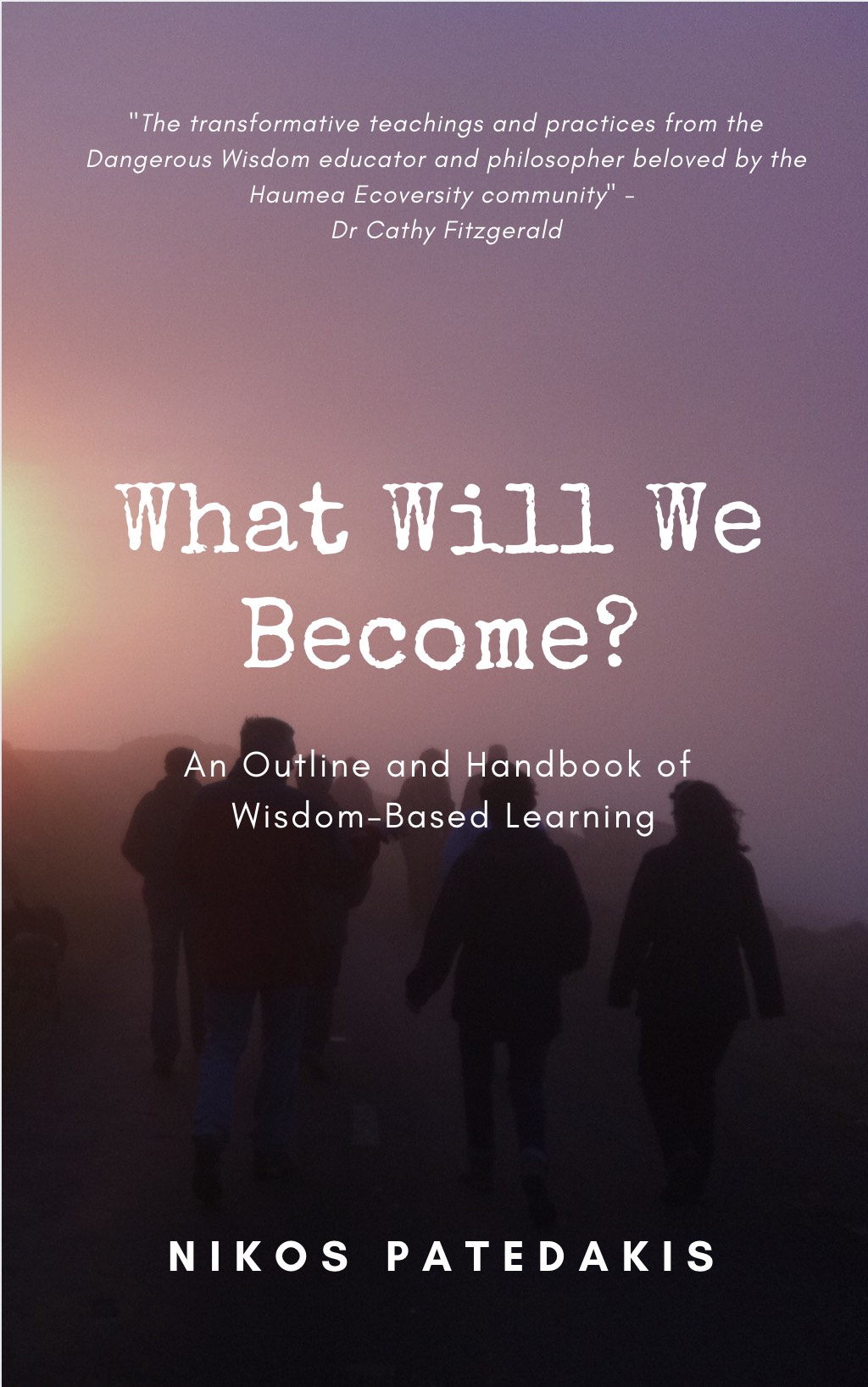 “Over the past year I was attending pilot programs of The Haumea Ecoversity on Ecoliteracy, Creativity as an Act of Love and their Earth Charter course. The material we studied was of great thinkers and scientists of the environmental movement, as well as the academic work of both Cathy Fitzgerald founder and teacher & philosopher Nikos Patedakis. They were phenomenal in their breadth of knowledge, fastidious in their references and footnoting, and always insightful. Inspired by the rigour of their scholarship, I see now a duty to tackle subjects I had discounted as being beyond my role as a painter of slow / low tech tendencies who had become petrified of the all-pervasive power of the web. Thus I have become keener to learn more about endemic local phenomena, such as Cryptogamic life or in the ethnographic study of local buildings techniques..) From this, I realise we each ought to better understand the biological intricacies that support us. We need to insist upon such an education as a basic prerequisite for our children and our leaders.”

“I can't believe I have a coach, I have someone who speaks to me about all the things I seem to have spent my life kind of more on my own with. I'm feeling immense gratitude right now. After our dialogue together and listening to your podcast, I feel very profoundly affected. I feel like a little invertebrate creature who's just swum into a much bigger pond. Not sure what to make of it, but it feels great, curious, new. How wonderful . . . A person can get more out of an hour of this work than they can in three years of weekly psychotherapy . . .”

“"The 'Creativity as an Act of Love' course with Nikos shares similar challenges, joy, intimacy and honesty to the Haumea Ecoliteracy course. It also helped me reframe my own philosophy, not only in facing the Ecologic and biodiversity challenges ahead but with deeper explorations into compassion, dangerous philosophies and a range of practical tools. Nikos' depth of knowledge, patience and humour has created another valuable path for exploration. Its a path that offers a lifetime of discovery yet with immediate and measurable benefits.' Tom Duffy, sculptor, musician and educator - Ireland”

Tom Duffy: socially-engaged artist, art facilitator, visual and percussive artist, Ireland
Nikos is an experienced philosopher and educator whose transdisciplinary work arises at the intersection of Nature and Culture—the sciences, the arts, and the wisdom traditions (particularly the traditions of the Ancient Greek, Roman, and Hellenic periods, Eastern philosophy, and Indigenous traditions). His research encompasses the traditional areas of ethics, epistemology, aesthetics, ontology, and metaphysics, but remains rooted in the ancient Western orientation of philosophy as a way of life, in which philosophy is seen as fundamental to the healthy transformation of self and society. This is the tradition of Western philosophy that influenced Gandhi and Martin Luther King, Jr. His philosophical approach is also influenced by the principles of permaculture, and he received Permaculture Design Certification (PDC) in June, 2021.

Nikos pioneered wisdom-based learning at two of the most diverse universities in North America: San Francisco State University and University of California, Santa Cruz. The wisdom-based approach provides a truly holistic, ecoliterate orientation incorporating contemplative practices and philosophical frameworks that lead to transformative experiences. This approach developed in part from his certification as a teacher of the Alexander Technique, which, as the great educational philosopher John Dewey put it, “bears the same relationship to education that education bears to all other human activities.” His pedagogical approach was refined not only in the university, but also during his time as a professional dance teacher, and as a negotiation trainer and consultant for Fortune 500 companies.

Nikos left academia to focus on helping professionals of all kinds learn to think the way nature works, by taking advantage of what he sees as the single greatest untapped cultural resource humanity has: The philosophical traditions of the world, and the storehouse of practical wisdom they contain for solving complex personal and global challenges. Nikos sees art as having a special relationship with philosophy. Both philosophy and art seek to see the world with fresh eyes and an awakened heart, and they seek to offer this insight and inspiration to the culture at large, for the benefit of all citizens and the broader community of life. To bring about a more just and thriving culture in the most direct and intelligent manner, we need to empower the arts by making philosophy as a way of life available to artists and to arts education. Nikos offers training to artists that transforms both their experience of life and their practice of creativity and art making.

Learn more about Nikos and his work at www.DangerousWisdom.org